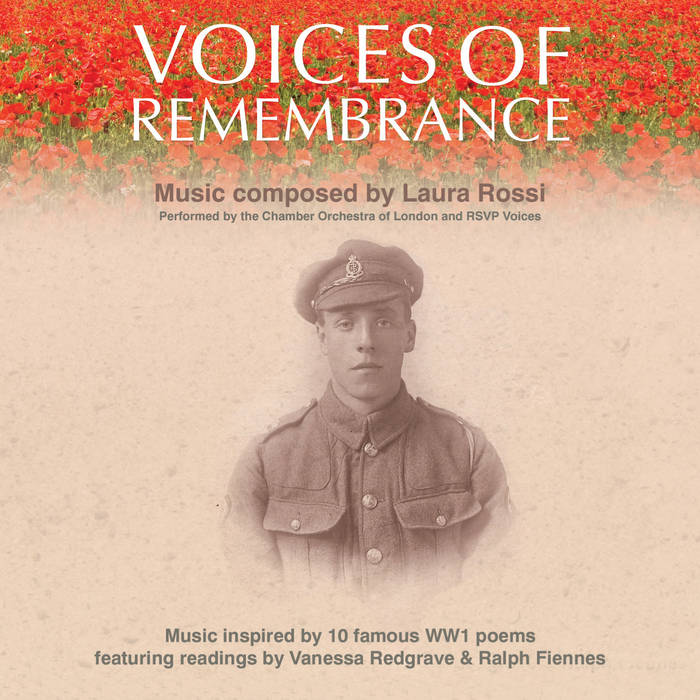 Voices of Remembrance is an orchestral/choral work featuring poetry readings by Vanessa Redgrave & Ralph Fiennes, written to commemorate and remember the soldiers who lived, fought and died in the First World War.

Through her experience scoring The Battle of the Somme and her extensive research on World War One,
Laura Rossi has created a richly evocative work that combines her stunningly emotive music with these
important historical poems.

Vanessa Redgrave and Ralph Fiennes bring their unique artistry to the work. Their readings are incredibly moving and expressive. The combination of the music and poetry moves us closer to the thoughts and feelings of the soldiers: their spirit, their strength, their hopes and fears.


About the composer
Laura Rossi has written extensively for film and television, including scores for Paul Andrew Williams'
critically acclaimed features, London to Brighton and Song for Marion. She has also scored many silent
films including the British Film Institute’s Silent Shakespeare and the famous IWM 1916 film The Battle of
the Somme. Her music has been recorded and performed by the Philharmonia Orchestra, the London
Musici Orchestra and the BBC Concert Orchestra and performed at the Barbican, the Royal Festival Hall
and the Queen Elizabeth Hall, London. Laura is also lecturer for film music at the London Film Academy